I think every day since the day we arrived at Skukuza, we’d seen elephants. It was almost possible to become a bit dismissive about them at times. However, on the drive further north we came across the biggest elephant we’d seen by a long way. He was in a steep sided muddy pool in an otherwise dry riverbed. His tusks almost reached the ground.

As we went further north, at times the landscape looked apocalyptical – mile after mile of blackened lifelessness caused by bushfires. The heat seemed to be increasing by the day and at times it was too much to tolerate even in the shade.

Eventually we arrived at Punda Maria. This was the place I’d been most anticipating reaching. There was only one species I’d made specific plans to try to see and this is where I’d hoped it would happen. But that would have to wait until later. For now we explored the camp. Birds were particularly hard to see well here, but many that we did see were species that we’d not seen further south. One of the first was a Little Sparrowhawk bathing in a small pool of water. It was so hot that the bird seemed far happier to be in a cool place than it was concerned about me pointing my lens at it. When it did decide to fly, it went to the nearest branch for a few minutes then returned straight to the pool. There’s a great waterhole at Punda Maria at which we spent a while watching Elephants, Warthogs, Buffalo, etc. A short drive around brought some new birds with it, but really all I could think about was the coming evening.

That evening before dusk we set out to try to find the subject of my excitement and anxiousness – the Pennant-winged Nightjar. It’s a bird that I’ve wanted to see for a long time, and I had a limited opportunity to do so here. It turned out to be something of an adventure, so I’ve written a separate piece dedicated to that experience in my series of ‘on the trail of…’ articles.

The next morning we left our bungalow at Punda Maria and moved into a tent on the edge of the camp. I set up a trail camera in the bush just a stone’s throw away which would stay in place for the next couple of nights. After some birding around the camp we headed north to Pafuri on the Luvuvhu River, stopping for various things on the way including a Flap-necked Chameleon on the track. A few picnic tables and thatched shelters overlooking the river at Pafuri provided a good place for an explore and we soon found an African Rock Python lurking in the thatch of one of the shelters.

From Pafuri we went further north still until we reached Crook’s Corner, a place where the borders of South Africa, Zimbabwe and Mozambique all meet. Here I was even able to get a few species on to my Mozambique list! One of the highlights on the return trip to Punda Maria was some Dwarf Mongoose that kept emerging from the termite mound that they occupied.

Exploring the area that evening was particularly good as we saw a couple of Large Spotted Genet, African Civet, nice sightings of Fiery-necked and Square-tailed Nightjar and our first Leopard of the trip. The Leopard was led out in the open and I managed a couple of shots before it spotted a Spring Hare upon which it started to stalk. The hunt wasn’t successful and the Leopard resigned within seconds. The amount of insect activity at Punda Maria and the surrounding area was far more intense than the other places we’d visited. Searching for wildlife with powerful torches was attracting some particularly large insects towards us and we were repeatedly retrieving large bugs from within our clothing.

The next day was fairly relaxed. We spent the morning birding around the camp before setting off for a drive around the Mahonie Loop. Along the way we saw some good birds, and some entertaining Dwarf Mongoose. At one point when we took a bend in the track our way was blocked by an approaching bull Elephant. I immediately put the car in reverse and started travelling backwards until I could find a suitable place to turn the car around. Eventually the Elephant veered off towards some trees leaving us free to continue on our original route. Thankfully the little Toyota was still serving us well on the rough terrain, even if it was all a little impractical and uncomfortable!

That night we had some good views of Southern White-faced Owl and African Civet before we headed back to the waterhole at Punda Maria. Seeing the Elephants emerge from the darkness and stand statuesque near or in the water, occasionally taking a huge drink, or rumbling near sub-sonic communication to other elephants, or making slow motion gestures of affection towards each other made this a really serene and magical place to be. All the while European and Fiery-necked Nightjars would swoop between the elephants catching insects. At one point which I captured on low light video, a Leopard even turned up for a drink. Seeing birds that I’ve worked with so much in Britain now flying among Elephants and Leopards was really special for me and really gave an insight into the lives of these birds once they’ve left us in Britain at the end of summer. 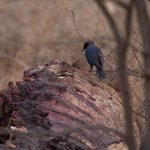 Arid landscape near Olifants camp Setting off from Olifants, a very early morning produced little wildlife (a few impala and a couple of zebra) but we did see an Aardvark burrow and nearby diggings. After a bit of birding back at the camp we drove north to Letaba. White-crested Helmetshrikes ... Read more

After three nights at Punda Maria it was time to leave. Our destination was Phalaborwa. We first drove back to Shingwedzi which was again a really good place for watching storks and raptors on the river. We also saw a huge Rock Monitor here which, despite its size, we managed ... Read more

When three Nightjars coalesce into one amorphous blob of cryptic camouflage it becomes hard to tell where one ends and the next one begins! #GlosBirds #Nightjar