Although so far I’ve only drawn wild animals (with the exception of the recent domestic cat commission!), for some reason I got the urge to have a go at drawing my first human. As far as I was concerned it needed to be someone instantly recognisable – if people can recognise who it is, then at least I know I’m on the right track towards being able to draw people! After much deliberation I picked my subject and made a start. I started using oil-based colour pencils but very quickly encountered a bout of self-doubt, and decided to start again using graphite. I’m not sure I did myself any favours by doing that, but I’ve gone too far to change my mind again. The following phone photo shows where I was with this drawing a couple of days ago. I’ll no doubt post at least one more update before it’s finished.

It's been a while since I've made any updates to the website. The main reason, as usual at this time of year, is the amount of time I've been spending working with the Nightjars. I have, however, started to find the time to pick up my pencils again after a ... Read more 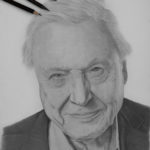 As with most of my previous drawings, it's always tricky to know when to stop. I think I've done all I can with this portrait of David Attenborough. I'd wanted to draw a human for a while, despite me previously telling myself I was only interested in drawing wildlife. Like ... Read more

When three Nightjars coalesce into one amorphous blob of cryptic camouflage it becomes hard to tell where one ends and the next one begins! #GlosBirds #Nightjar